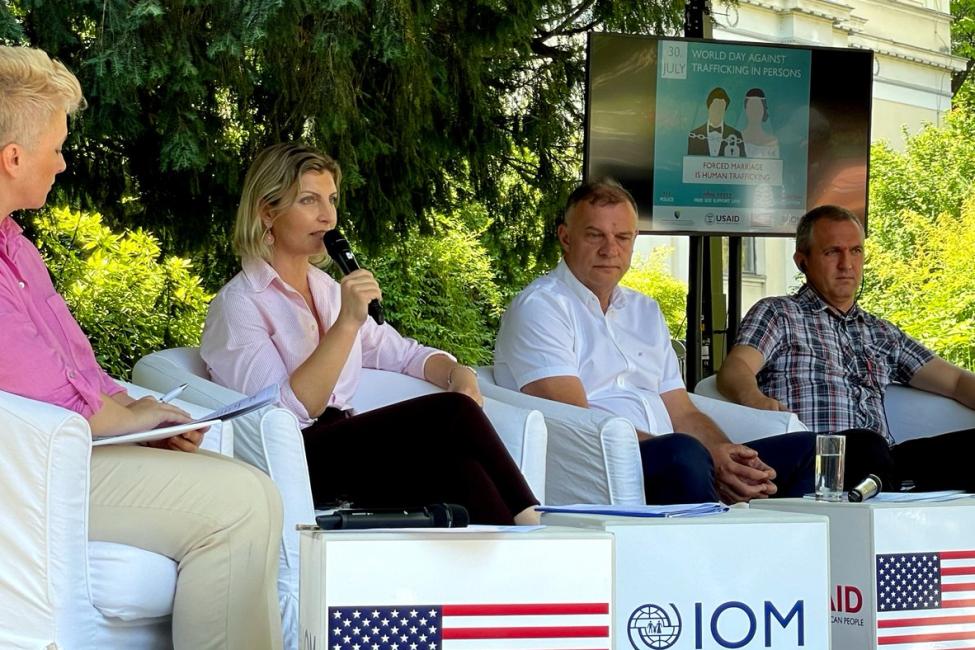 A free-of-charge instant photo for work documents might quickly turn into atrafficking situation . IOM Ukraine is offering this interactive experience to Instagram users with its new digital campaign “No single portrait”. It was launched on 30 July to observe World Day against human trafficking and will run on social media for three weeks.

A dedicated Instagram page hosts a digital mask, equipped with tools and filters for taking a photo for a work visa or CV. When the user takes a selfie and taps on the screen, their face becomes withered and the background turns grey, as if they were suddenly transported to a dark basement with blinking half-broken lights.

The caption of the photo sends an alarming message “Danger might be invisible at first” and a special arrow takes a user to the account created for the campaign (@nosingleportrait_IOM). This page contains visual materials and the address of the counter-trafficking web page stoptrafficking.org, providing information about human trafficking, safety rules and numbers of the relevant hotlines, including one, functioning with the support from IOM.

Photos of opinion leaders and all users, who tried the mask on, will be published on the platform under hashtag @nosingleportrait_IOM.

Due to the COVID-19 pandemic, more and more people find themselves in a difficult economic situation, and are forced to look for opportunities to earn a living, which leads to additional risks. The vast majority (93 per cent) of victims, identified by IOM in the first six months of 2021, have suffered from labour exploitation. About three quarters of them are men. Over 80 per cent of victims have technical or higher education. For the first time since IOM Ukraine provides reintegration support to trafficking survivors, Poland became the main country of destination for victims of human trafficking from Ukraine (38 per cent), followed by the Russian Federation (36 per cent) and internally in Ukraine (18 per cent).

In total, together with a network of partner NGOs, IOM has provided reintegration assistance to approximately 19,000 persons. This included legal consultations and representation in criminal and civil court, medical care, psychological counselling, shelter, vocational training, a grant programme supporting those trafficking survivors who aspire to set up their own business and other forms of assistance.

In partnership with Eurasia Foundation, the United States Agency for International Development (USAID) and the Ministry of Sports and Youth Policy of Turkmenistan iom organized a Youth Forum in commemoration of World Day against Trafficking in Persons.

“Youth remains one of the most active and highly mobile segments of the population, which may increase their vulnerability", Azat Atajanov, IOM Head of Office told the Forum. "That is the primary reason we decided to mark International Day against Trafficking in Persons by organizing this Youth Forum to increase the awareness of the youth of the risks of irregular migration and trafficking. We highly appreciate our partnership with the Government of Turkmenistan in the area of countertrafficking. Only in partnership with the Government, public organizations, key international partners and with support of youth we can count on success in combating modern trafficking in persons”

In his opening remarks Batyr Abdyev, the Head of International Relations Department of the Ministry of Sports and Youth Policy. stated “recently Turkmenistan approved its Youth Policy for 2021-2025 that features a number of strategic goals and activities aimed at providing the conditions for healthy, active, and successful youth involvement in social and economic life of Turkmenistan."

IOM's sub-regional Coordinator for the Western Balkans, Laura Lungarotti, spoke at a press conference hosted by the Ministry of Security of BiH/Office of the State Coordinator for Countering Trafficking, organized by IOM under aproject financed by United States Agency for International Development Mission in and United States Department of State/International Bureau for Narcotics and Law Enforcement in BiH. The full event can be viewed here

To commemorate the World Day Against Trafficking in Persons, IOM in Kazakhstan organized a media campaign that reached about 7 500 people. As part of the campaign, the Sub-Regional Coordinator for Central Asia, Chief of Mission in Kаzakhstan, Kyrgyzstan, Turkmenistan, and Uzbekistan, Zeinal Hajiev, wrote an Op-Ed for the Astana Times and was highlighted in the Forbes Kazakhstan news site. Mr. Hajiev talked about the human trafficking situation in Kazakhstan and what IOM is partnering with the national government and non-government bodies to support victims of human trafficking and improve the system. Additionally, a victim of human trafficking talked about what she went through and how IOM’s NGO partner is supporting till today to mitigate the consequences of sexual exploitation she was in more than ten years.

On July 27, 2021, the Mission of the International Organization for Migration in Uzbekistan, together with the National Centre for Human Rights and the Ministry of Internal Affairs of the Republic of Uzbekistan, organized an international forum. The topic of the event was "The Palermo Protocol: national experience and foreign practice." The meeting wasdedicated to implementing the Action Plan for expanding cooperation between the Republic of Uzbekistan and the International Organization for Migration (IOM) for 2021-2023".  The forum widely noted the role and importance of the IOM in combatting human trafficking, the close cooperation of the IOM with non-governmental, non-profit organizations in providing  assistance to victims of human trafficking upon their return to their homeland.

Moreover, participants shared national experiences as topical issues of combating human trafficking and discussed cross-border cooperation between the Central Asian countries on cooperation in this area. Various measures were proposed for the development of partnership between the IOM and government structures in achieving common goals. The event was attended by representatives of relevant ministries and departments, educational and academic institutions, civil society institutions from Uzbekistan, Kazakhstan, Kyrgyzstan, and Tajikistan. Due to the quarantine requirements, the forum was held online via the Zoom platform.

The U.S. Embassy’s International Narcotics and Law Enforcement (INL) office supported a“Victims’ Voices Lead the Way” roundtable, dedicated to the “World Day Against Trafficking in Persons.” As INL’s implementing partner, IOM conducted the roundtable to emphasize the necessity of a victims-centered approach in combating human trafficking. The roundtable highlighted the importance of listening to and learning from survivors of human trafficking.

INL Director Sita Farrell noted that many victims of human trafficking had experienced ignorance or misunderstandings in their attempts to obtain help. Some have also faced traumatic post-rescue experiences during identification interviews and legal proceedings, revictimization, or punishment for crimes that their traffickers forced them to commit. Others have been stigmatized or have not been adequately supported.

In 2021, INL financially supported IOM’s counter-trafficking project to bolster Tajik authorities’ skills and resources further to prevent, identify, and prosecute this crime, allowing survivors of TIP to be key actors in the fight against human trafficking. This project will strengthen coordination and provide training and materials to vulnerable groups such as migrants, victims of domestic violence, unemployed persons, young girls, and women withno formal education. They will learn about the risks of TIP, methods of recruitment and coercion, preventative measures, and where to refer cases.

IOM Azerbaijan organized a sensitization event focusing on trafficking as a form of violence against children.

In coordination with the NGOs, IOM organized art workshops in each shelter on “Children’s Potential”. During these workshops Mission’s and the shelter’s personnel explained to girls and boys what children’s rights are and discussed with them on their future and potential. Children were asked to paint where they see themselves in the future and draw their expectations and wishes.

The paintings and handicrafts, made by the children from the shelter of Azerbaijan Children Union, reflecting the national attributes of Azerbaijan were exposed at the exhibition titled "The Second Breath" dedicated to the World Day Against Trafficking.

Kamala Aghazade, director of shelter of Azerbaijan Children Union says that it is important to raise public awareness about the crime against children because they often become victims of traffickers. “In case of Azerbaijan the most common forms of child exploitation are forced begging, labour and sexual exploitation. In most cases children are forced to beg by their parents, and relatives”.

Supported by IOM Azerbaijan the Clean World Women's Aid Public Union also organized an auction exhibition of paintings and handicrafts of the children from their shelter. The money from the sale of children's drawings was transferred to the Fund for Assistance to Victims of Human Trafficking of the Ministry of Internal Affairs.