Thousands Participate in GMFF Across the Region 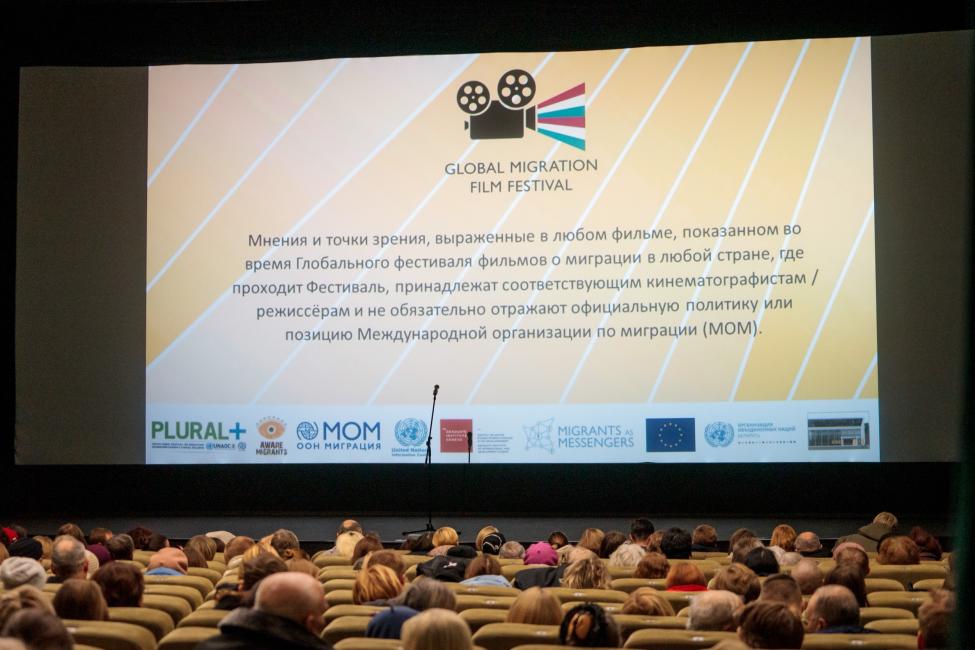 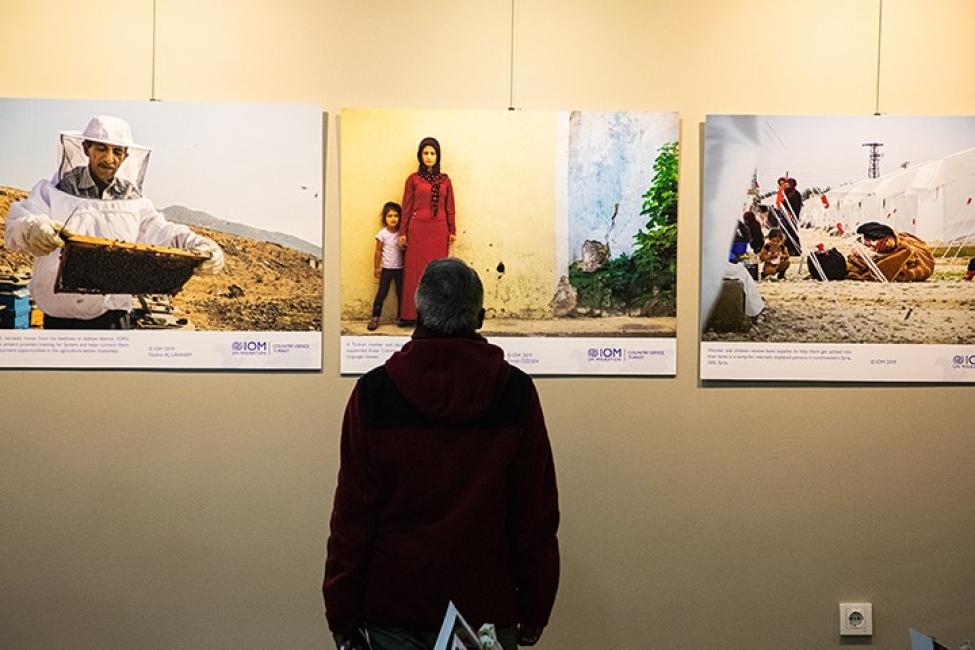 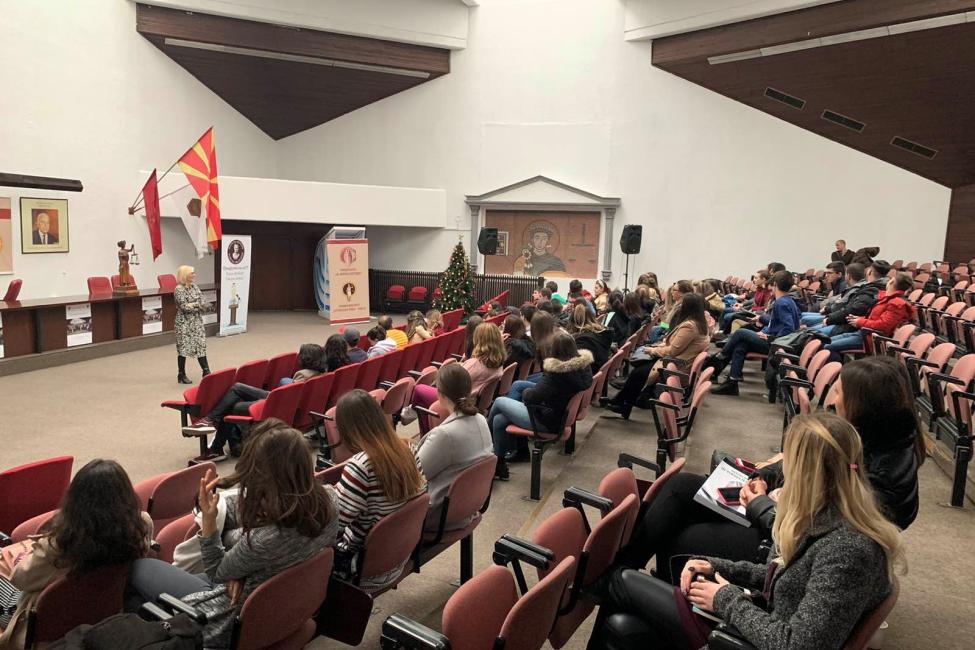 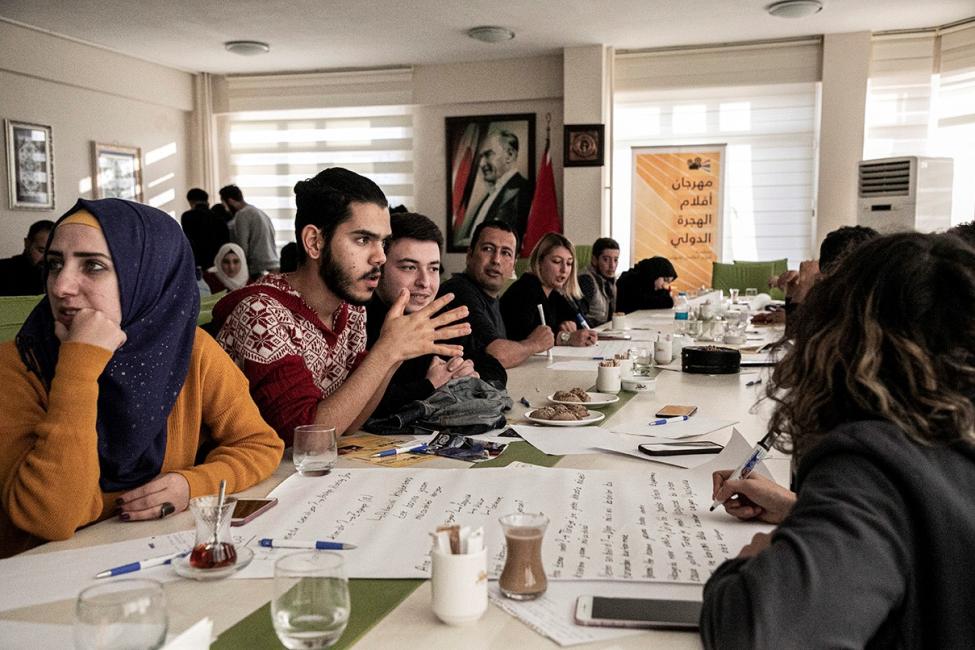 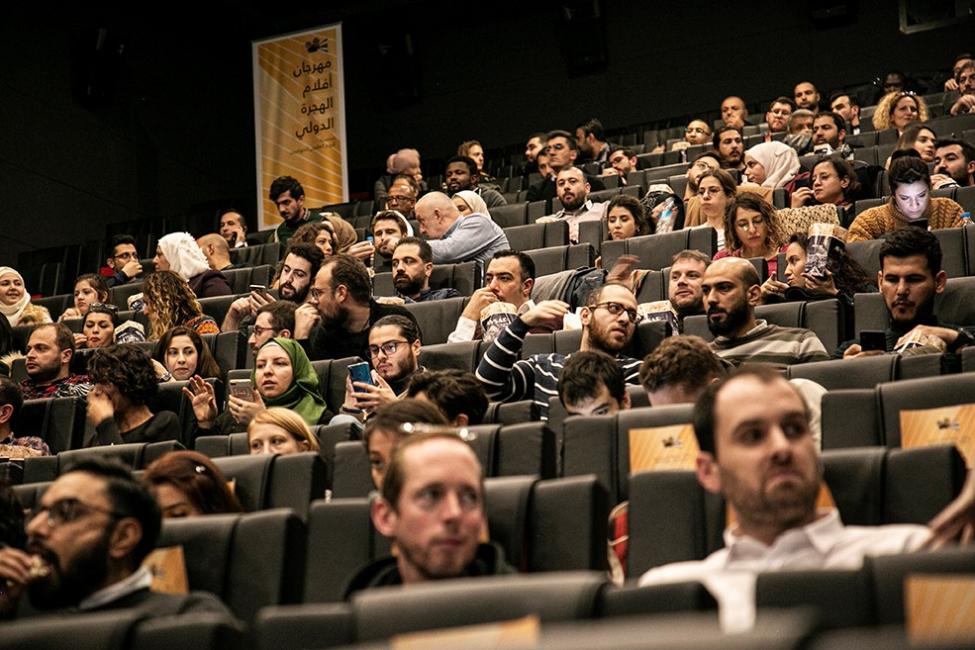 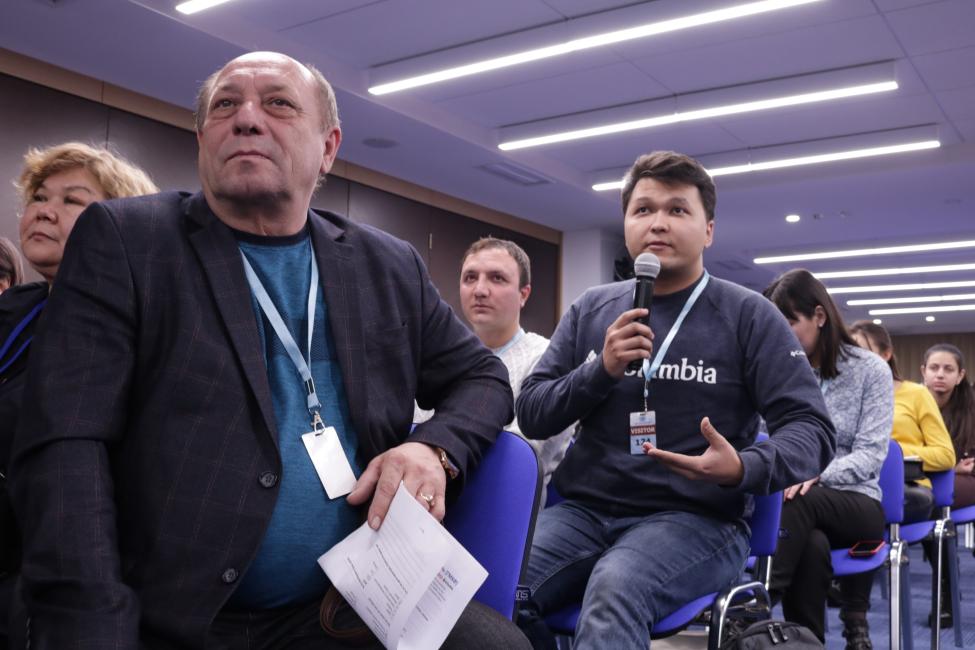 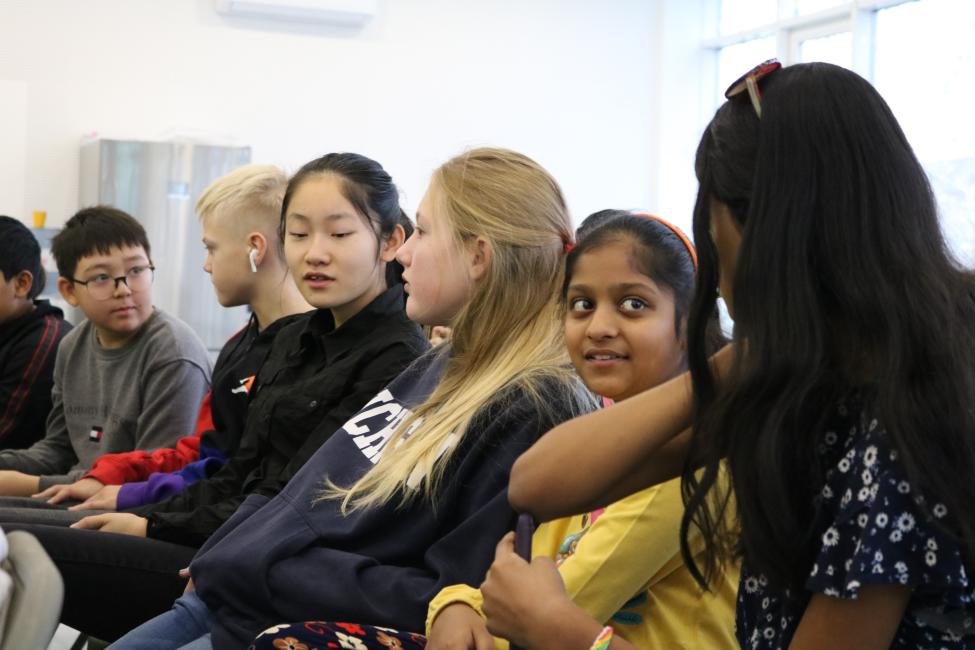 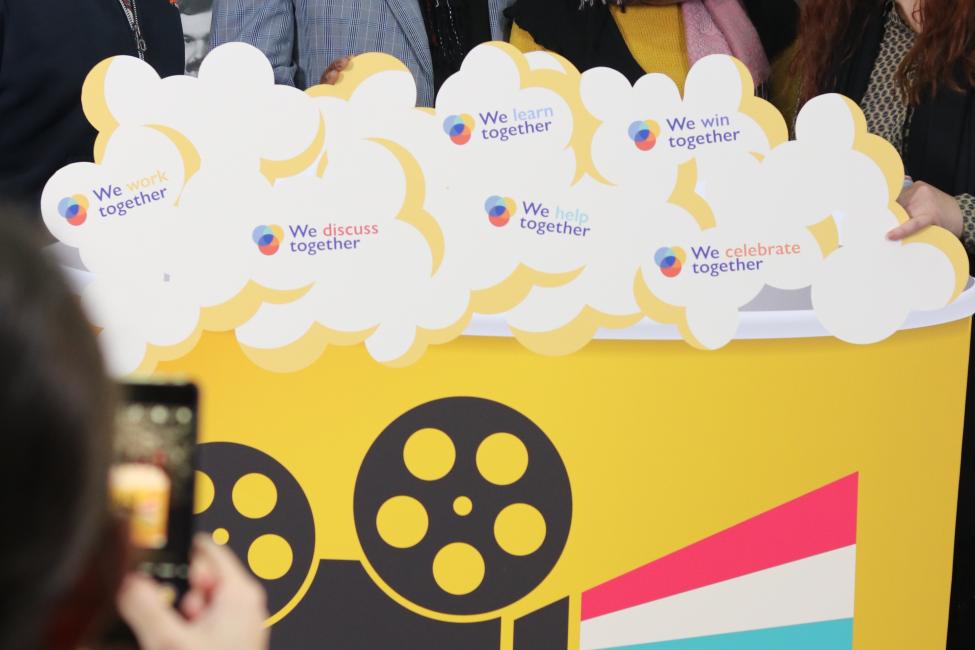 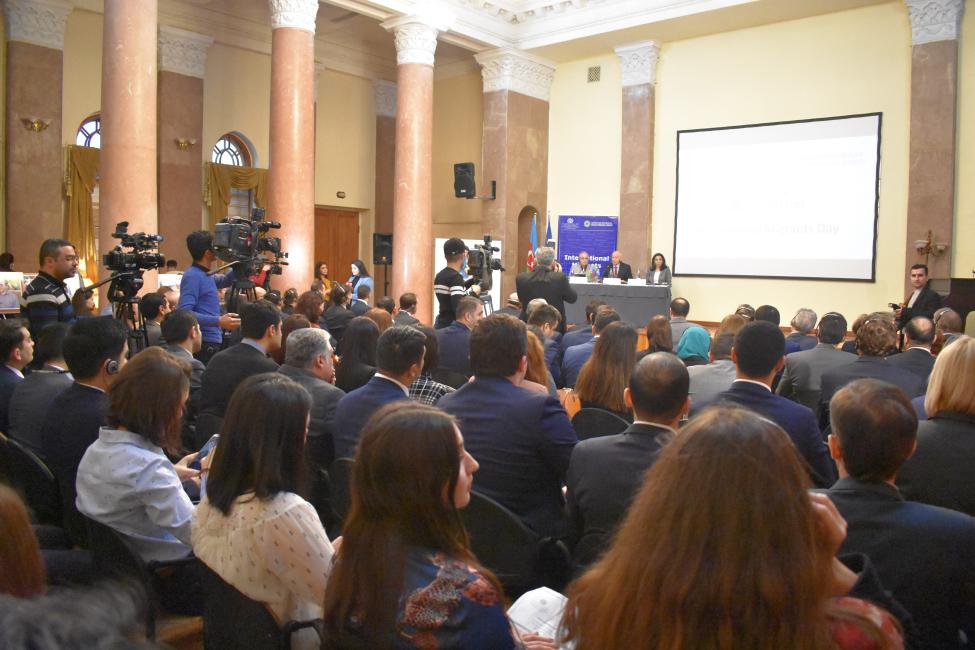 Our Missions joined over 100 IOM venues across the globe for the fourth Global Migration Film Festival between its opening in late November and the final events on 18 December, International Migrants Day.

In Vienna, seat of the Regional Office, an event was held at lunchtime on 18 December at the UN Headquarters building in Vienna, consisting of a screening of “All People’s Orquestra”, a film about refugee and migrant musicians in Brazil. It will be followed by a panel discussion on a musical theme, with representatives from Open Piano For Refugees, among them a Syrian teenager who has assimilated into Austrian Society through music.

“The theme that we are celebrating this year is Social Cohesion, and we salute the directors, writer, actors and technicians who, since the earliest days of the silver screen, have used the iconic power of film to bring people together, literally and figuratively”, said IOM’s Regional Director Argentina Szabados.

She reminded the audience that many of the earliest film-makers were immigrants themselves, and their movies, in the early 20th century, depicted their world: a world on the move. “They brought the dramatic, poignant and comic stories of migrants to diverse audiences, through images that provoked empathy amongst people of every culture.”

After the screening, a panel discussion heard from Kathrin Zirn, from Open Piano for Refugees, and one of the initiatives brightest stars, Hani Alneab, a 19-year-old Syrian refugee. By leaving pianos in open spaces, Open Piano For Refugees have demonstrated that magic can happen, and cultural borders disappear when music is used as a common language, said Ms Zirn.

Hani won the hearts of the audience at the event at Vienna’s UN HQ when he revealed that he learned to play piano through YouTube tutorials, and that he developed the habit of playing all night and sleeping during the day, because the night-time was the only time he could find a quiet room at his crowded refugee accommodation in Austria.

IOM’s senior regional media and communications officer Joe Lowry explained the significance of IOM’s Migrants Day message of “#WeTogether”, saying that human society can only thrive when we live, learn, work and grow together.

In closing, Ms Szabados thanked Martin Nesirky, United Nations Information Services Director for hosting a third major event on behalf of IOM, and, in her last public engagement with IOM before her retirement, expressed her appreciation to all who have helped her to have a memorable and successful career.

The IOM Skopje official selection for this year was Nikos Pilos’s 17-minute black and white documentary trilogy “Dying for Europe”. In Dying for Europe, the largest flow of migrants since the Second World War is shown through fragments of personal stories. Constructed as a trilogy, this harrowing film sheds light on the strength and hope of those who, daring to dream of a better life in Europe, are ready to sacrifice their own. Screenings and panel event were also held in several school and universities in the North Macedonian capital, where students had the opportunity to get acquainted with the work of the IOM in the country and to take part in open discussion.

Crowds flocked to cinemas in the Belarusian capital Minsk to see another Brazilian film, Jovens Polacas, a film about modern slavery. The GMFF had a slot inside the 12 UN/EU Humanity, dignity, equality, justice film festival. See the video roundup here

Global Migration Film Festival in Tbilisi featured IOM’s Exhibition “Stories Untold: Return of Georgian Migrants in Photos” by Dina Oganova and screening of Vakho Jajanidze’s “Exodus” + discussion. The festival is supported by the Office of the UN Resident Coordinator and Department of Culture, Education, Sport and Youth Affairs of Tbilisi City Hall

Over 1,000 people gathered across seven cities in Turkey since November 28th for the GMFF. Using the power of film to inspire, educate, and entertain, the festival has featured films by professional and emerging film makers depicting the migrant experience around the world.

Filmmakers from countries such as Turkey, Germany, Guatemala, Syria, among others, screened films that challenge the all-too-often negative depictions of migrants and their families and show a different set of stories to help us understand migration in more human terms.

At a screening and reception Friday evening December 13 at the Institut Francais in Ankara, Ambassadors, UN officials, representatives from the embassies of the United States, Japan, Germany, France, among others, along with NGO staff, journalists, academics, and students came together for the screening of the award-winning film “The Guest: Aleppo to Istanbul” by Turkish film director Andac Haznedaroglu. Moving the audience to tears, this poignant fiction drama brought to life the everyday challenges and realities many Syrian refugees and migrants in Turkey face.

In a Q&A session following the screening, Director Haznedaroglu said, “my aim with this film is to show the human dimension of the refugee crisis and get viewers to feel what refugees feel…to stop and make each of us think what we would do if we were faced with war tomorrow.”

IOM Turkey’s Chief of Mission, Lado Gvilava, commended Haznedaroglu. “This is one of the most real portrayals of the difficult circumstances refugees all over the world face and the heartbreaking choices they are forced to make. It hit on key migration issues from early child marriage, violence against women, human trafficking, to the challenges of social and economic inclusion – all issues our IOM Turkey mission works to address.”

The GMFF plays an important role in bringing attention to migration issues at a key moment of the year – in the days leading up to International Migrants’ Day. First proclaimed by the UN General Assembly in 2000, IMD recognizes the contributions of migrants to communities across the globe and to sustainable development.

In the spirit of this year’s IMD theme of social cohesion, IOM Turkey displayed a unique photo exhibition titled “Resilient Communities” at the Institut Francais in Ankara that profiles community initiatives that support the social and economic inclusion of migrant communities in Turkey. The exhibition is on display today at the Büyük Theatre at Genclik Park Culture Centre in Ulus, Ankara’s historic city centre, for an event organized by the Ankara Provincial Department of Migration Management.

Almaty International School students eagerly participated in the overall discussion about migration after the movie "Haru's New Year" ended. These students knew what it felt like themselves to be in a new school/environment which they knew nothing about. They all commented on the fact that when someone new joins their classes they are happy to involved them and try to become friends.

In the aftermath of the movie "In Times of Rain", speaker in the photo shared their view of the situation in the movie and linked it to theirknowledge about migration and its issues regarding children being left with relatives in countries in Central Asia such as Kyrgyzstan. A relatively large amount of the audience that screening had been exposed to certain negative aspects of migration and shared their experiences with others.

Overall both events had strong participants who had different comments regarding the topic of migration and none were afraid to share it with the audience.

In Ukraine, the diplomats, students, and regular cinema lovers gathered for the screening of “Haru’s New Year” and “Three August Days” in Kyiv’s top cinema hall “Zhovten” on 18 December. The event was supported by the Embassies of Canada and Estonia in Ukraine. To provide the guests with an opportunity to learn firsthand experience of migrant integration and social cohesion, IOM invited Vice President of the African Council in Ukraine, Issa Sadio Diallo, who arrived in Kyiv back in 1986 to study aviation, a student of National Medical University of Ukraine from the Republic of Guinea, Barry Oumou Hawa, and an expert in migration and gender mainstreaming, Anastasiia Ianovytska, who moved to Canada when she was 10 y.o., and came back to Ukraine a few years later, inspired by her migration experience.

IOM Azerbaijan screened featured the film "The Lost Boy" featuring the hard life of teenage migrant. During the event, video clips and photos of migrants living in the country and abroad were shown, and participants were presented with eco-friendly packages prepared by IOM Azerbaijan.