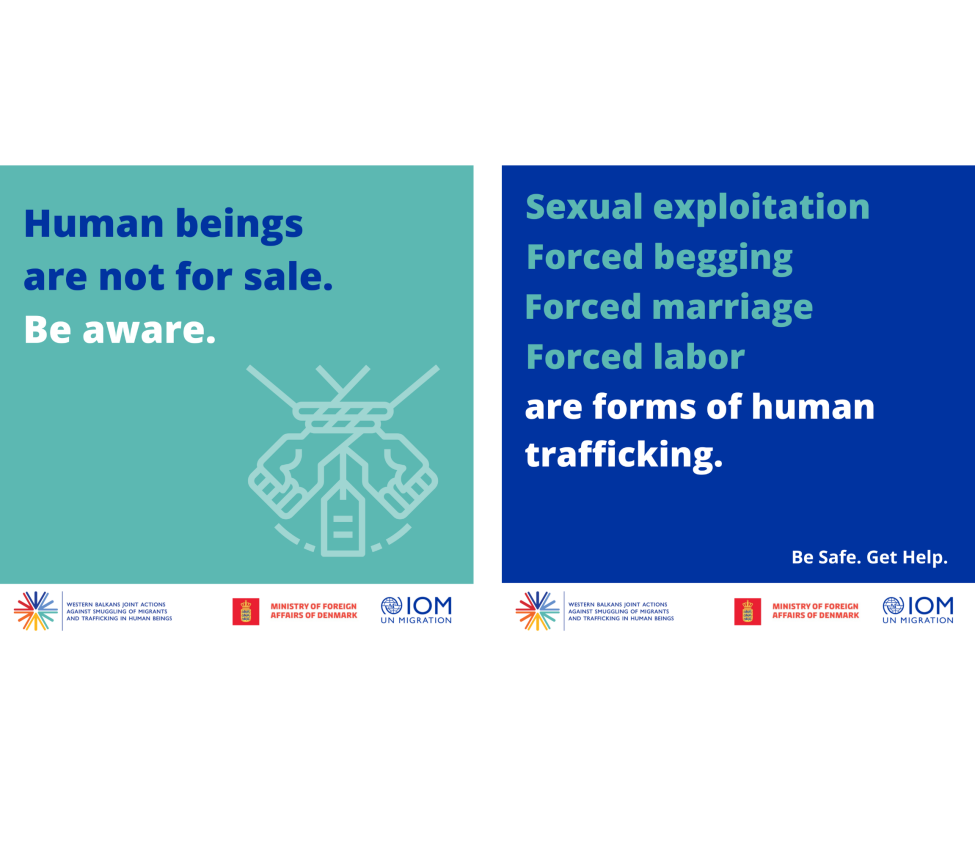 IOM has launched a two-week social media campaign in the Western Balkans  to coincide with World Day Against Trafficking in Persons, July 30.

Under the motto “Be Aware. Be Safe. Get Help”, the campaign aims to cover the broad spectrum of prevention by bringing awareness of the dangers and different forms of human trafficking and reminding of the few actions everyone can take to be safe, get help and help (potential) victims.

Acknowledging that anyone can become a victim of trafficking, the campaign focuses on the most prevailing forms of human trafficking identified in the Western Balkans: sexual exploitation, forced labour, forced begging, and forced marriage.

While some forms of human trafficking are well-known by the wider public, some, including those prevailing in the region, are more difficult to spot.

By disseminating messages in local languages throughout the region, IOM aims to tailor its approach to local contexts and raise awareness on those specific issues and remind everyone of the role they can play in ending human trafficking.

"In the Western Balkans, trafficking in human beings is recognized as one of the most pressing challenges related to irregular migration, violation of human rights and trans-border organized crime", said IOM's sub-Regional Project Manager, Nerimana Rifatbegović."

"Intensified and more complex mixed migration movements have increased vulnerability to trafficking in the region. Migrants, refugees and asylum-seekers traveling through or stranded in the region are all at risk of becoming of victim of trafficking, particularly women and unaccompanied children", she added

In the past year, identified victims of trafficking were both domestic and foreign nationals, exploited within the region or abroad, making the Western Balkans a region of origin, transit and destination for victims of trafficking (VoTs) – children, women and minorities members being the most vulnerable groups.

The campaign, developed within the sub-regional project “Western Balkans Joint Action Against Human Trafficking” funded by the Ministry of Foreign Affairs of Denmark, is supporting IOM’s long-lasting commitment and activities to end human trafficking globally and in the region.

While IOM Kosovo* developed a national outreach campaign in June 2022, in July, IOM Bosnia and Herzegovina officially launched a new mobile application to improve the assessment, more proactive identification of victims of trafficking and better assistance and support to (potential) victims. The application is using developed indicators specifically tailored to the four most prevailing forms of trafficking in the country.

In the future, IOM will keep enhancing capacities of front-line actors to screen, identify, refer, and assist persons in situation of vulnerability in the Western Balkans, applying protection sensitive approaches to assisting victims of trafficking.

* References to Kosovo shall be understood to be in the context of United Nations Security Council resolution 1244 (1999).

IOM Continues Support to Moldova with Equipment for Border Guards